Money Pancho opened its first restaurant in Guadalajara City, Mexico in the summer of 1975. Shortly thereafter the second location began serving fine Mexican cuisine in Manzanillo, Colima, Mexico. A young Jorge Lopez was the chef and maitre'd at the Guadalajara location.

The two restaurants thrived under the adminstraton of Frank Conrad (Mr. Money) and Federico Aselei (Mr. Pancho) and the culinary expertise of Chef Lopez. By 1982 Conrad and Asalei were unfortunately at odds with one another and the Money Pancho restaurants, although thriving, were closed (in Mexico) for good.

In 1989 Jorge Lopez decided that he would move his family to the United States. He first acquired the necessary rights and recipes for Money Pancho Family Restaurants and then headed north. He spent a number of years working at restaurants in and around Ventura County (Kelly's, IHOP, El Torrito, Acapulco), first as a waiter then as a cook, then management. He wanted to familiarize himself with the American restaurant business.

In 1998, Money Pancho Camarillo opened and has been successful ever since, treating its customers to the culinary delights of Chef Lopez. Money Pancho’s reputation is built upon the culinary cornerstones of good food and good service at a reasonable price. The margaritas alone are worth a visit with their award winning handmade mix that's a specialty of the house.


"Welcome to Money Pancho”, are the first words one hears when passing through the front door. Once seated you will feel right at home. As for the food, it's prepared in the traditions of Mexican home style cooking. All the ingredients are fresh and the zesty salsas are unique to Money Pancho. If there’s something you would like that’s not on the menu, don’t hesitate … ask for it!

Enjoy the food, enjoy the music, and relish the company you are with. 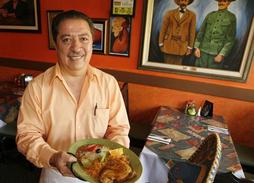 One thing we've learned in all the years of running our restaurant is that no two guests are the same. We can customize the dining experience for anyone who walks through our doors.